India is a land of rich cultural and folk art forms. Every state in India witnesses an array of traditional art that is passed from generations since centuries. Among these, tribal art occupies an important place in the Indian handicraft industry. Practiced by the various tribes settled in different parts of the country, these tribal art forms celebrate the customs and traditions practiced by their respective communities. The Warli paintings by the Warli tribe near Mumbai in Maharashtra are one such special tribal art.

Though the exact origin of this art remains unknown, Warli paintings came to light in the early 1970s when Jivya Soma Mashe and his son Balu Mashe started exhibiting their works in Mumbai. Their paintings were purely an artistic expression of their understanding of this traditional art form leaving behind its religious or cultural connotations. Jivya has since then come to be known as the father of modern Warli painting. The word ‘warli’ comes from ‘warla’ which means a ‘piece of land or field’. This forms the basis of Warli paintings as the earth or ground forms its background theme. The main occupation of the tribals of Warli has always been farming and therefore most of the paintings establish the harmony between nature and its various life forms. In Warli paintings, basic geometric shapes of circles, squares, and triangles are used and every aspect in these paintings is represented through these shapes only. In these paintings, the canvas or the background is divided diagonally, vertically, or horizontally. The landscapes or the figures are enclosed within a closed pattern and all characters are given their individual space and visibility. The paintings depict the humans and animals engaged in harvest, cultivating, hunting, fishing, farming, cooking and even dancing and celebrating various festivals and occasions.

Warli paintings began an art form practiced by the women of the tribe as a means to decorate their homes to celebrate festivals, marriages, etc. To begin with the painting, first, the walls of the huts were coated with cow-dung, and then with mud. Finally, the wall is coated with the reddish-brown terracotta paste. A paste of powdered rice and gum was prepared and the paintings were done using pens or brushes made by thin sticks from the local Baharu tree. Each symbol depicted in these paintings had some significance. The circles represent the sun and moon, the triangles represent trees and mountains, while the square represents the earth or land. The central motif in most paintings is the square indicating the sacred enclosure for the mother goddess symbolizing fertility. 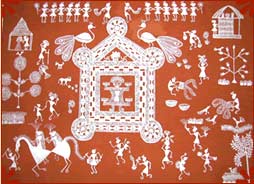 Another central theme for the paintings is the famous Tarpa Dance of Warli tribes. Tarpa, is a trumpet-like instrument that is played by the tribe during their festivals. All the people of the tribe danced holding hands and facing the Tarpa, and moving along with it. The dance symbolizes the festive spirit and celebrations. Warli art soon widened its expanse and moved from the wall paintings to the home décor and clothing items. From vibrant umbrellas to coffee and tea mugs, wall clocks, murals, wall hangings, bed sheets, bed covers, cushion and pillow covers, jewellery pieces, utensils, pots, and even stationery items. Warli art was welcomed with open arms by the fashion industry also. From scarves, kurtas, to lavish silk and jute saris, all had warli paintings printed on them. Traditionally, Warli paintings were done on a red ochre background with white paint only. But, today, a variety of colours are being used to replicate these artistic motifs on fabrics, home décor, and several ornamental forms.

Efforts are made to strengthen the position of the Warli tribe and preserve its traditional art form. With this aim, Warli Art is registered with a Geographical Indication certification (GI tag) in the year 2014.